Science is everywhere and what better time to enjoy an experiment or two from the comfort of our own homes – there’s something here for kids and adults alike!

For more fun experiments every couple of months, sign up to the Scientell newsletter.

Infrared is invisible to humans, at least. Some snakes have holes on their face called pit organs, which can detect infrared radiation from warm bodies up to a metre away. TV remote controls use a beam of infrared light to turn on and change the channels.

Light is made up of wavelengths. The infrared wavelength is slightly longer than red light (the light that is visible to us). Let’s test how the wavelength difference behaves.

Light was stopped by a single sheet of paper. What will it take to stop the remote’s infrared light? Try several sheets of paper, your hand and other objects. Will either visible or infrared light make it through a cloud of fog? Try recreating a cloud using a puff of powder and shining the torch and remote through.

Some TV remotes use a blue-tooth connection and this experiment won’t work for these. To test if your remote uses infrared or not, turn your phone camera into selfie mode and take a selfie with your remote, while pressing one of the buttons. If it uses infrared you’ll see a small reddish coloured light appear that you can’t normally see! This is because our eyes are not adapted to see infrared. Some digital sensors like the ones in our phone or computer web cam are more sensitive light, which is why they can see it.

Astronomers use infrared radiation to ‘see’ objects in space whose visible light has been blocked by interstellar dust, such as distant stars. The observation of the universe’s background infrared glow, believed to be the traces of a huge explosion, is evidence that the universe was a single point before exploding in an event called the Big Bang. 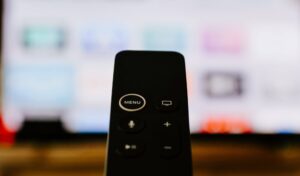 Listen to the wine

Parental permission to use wine glasses!

Your finger makes the wine glass vibrate, which produces an intense ringing sound.

What happens to the sound if you add or remove some of the water? Try the experiment using different glasses. Do glasses with stems work better than ones without stems?

The American scientist Benjamin Franklin invented an instrument known as a glass harmonica about 250 years ago. It consisted of a set of different size glass bowls. By pedalling, the player supplied the energy to make the bowls rotate.

Before a musical performance, the bowls were tuned, by adding just the right amount of water to each to produce the notes required. Then, while pedalling, the performer would touch the rims of the turning bowls to generate notes.

The famous composers, Mozart and Beethoven even wrote music for the glass harmonica.

When vinegar meets baking soda, the reaction is a fizzer. It’s so fizzy that lots of gas is made. The gas has a special name – carbon dioxide. Lots of those red fire extinguishers do exactly what you have seen here – they make carbon dioxide.

Try the experiment again. This time put a second candle in the bowl that is a centimetre or two taller than the first candle. Light them both. Pour vinegar onto some new baking soda. Which candle goes out first? What does this tell you about how dense or heavy carbon dioxide is?

What makes the bubbles in soda water, lemonade, cola and other fizzy drinks? Carbon dioxide. Pump carbon dioxide into water, add some flavouring and sugar and you have a soft drink. Unscrew the lid of a fizzy drink and you will see hundreds of bubbles form as the carbon dioxide escapes.

Entertain the kids and then enjoy a relax after a long day in the home-office.

Pour a small amount of sweet almond oil (or jojoba, sweet almond, coconut olive or baby oil) onto a sheet of greaseproof paper or paper towelling. Use this paper to wipe some oil around the side and base of a large muffin tray, simple sand moulds or a large patty pan tray. (The quantities given here will make about five bath bombs.) You can obtain all the ingredients listed here in supermarkets, chemist shops or health food shops.

Repeat steps 2 to 4 until you have used all the base mixture.

Leave the bombs to set in the mould overnight. Then carefully upend the moulds on a flat surface to release your bath bombs.

Run a bath, get in and add a bomb. Oh, don’t forget to get undressed! 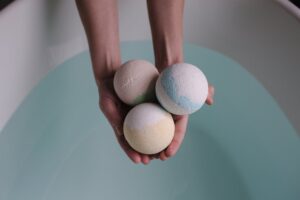 Parental help needed to use the stove.

Drop a few colourful flowers into a medium-sized saucepan. Just cover the flowers with water and boil for five minutes. Once cooled, sieve the liquid. Pour a small volume into two glasses. Add vinegar or lemon juice (an acid) to one and a teaspoon of baking soda (a base) to the other.

Hopefully, you have prepared your own acid-base indicator. Many plants produce dyes that change colour when acid or base is added to them. These dyes are called indicators because they can tell you how acidic or basic a substance is. If you don’t see any colour changes, try boiling flowers from a different plant – or even some vegetables – and repeat the exercise.

The best-known indicator is litmus, a dye made from lichens. Paper strips are soaked in the dye to make litmus paper. In acids, litmus paper is a red colour. Solutions of bases turn litmus blue.

Plants called hydrangeas have big colourful flowers. The flowers are blue if the plant is in acidic soil. Dig the hydrangea up and plant it in alkaline soil, such as soil with a lot of lime in it, and the flowers will soon become pink. 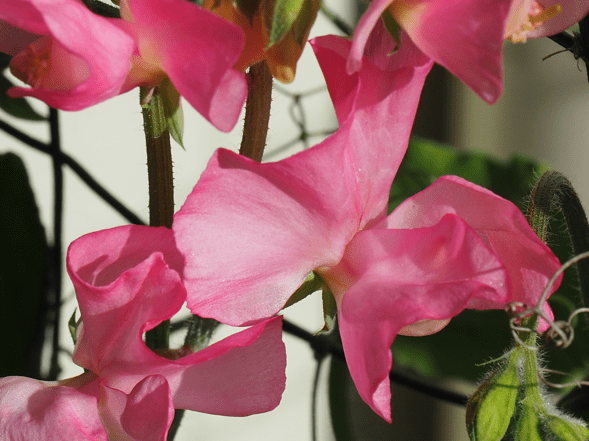 Here’s a simple experiment related to surface tension in liquids.

The detergent lowers the surface tension, loosening the grip between water molecules and allowing all the colours to mix.

By reducing surface tension, detergents increase the spreading and wetting ability of water, which helps to remove dirt from surfaces such as dishes and clothing.

A cloud in a bottle

Remove the label from a large, clear plastic soft drink bottle. Pour a little cold water into the bottle. Screw on the cap and shake the bottle. Squeeze and release the bottle a few times. What do you see? Nothing? Don’t worry.

Now, open the bottle and drop a lit match into it. (The match will go out when it hits the water.) Screw on the cap and shake the bottle. Squeeze and release the bottle again a few times. What do you now see? It may be easier to observe the goings on inside the bottle if you hold it up against something dark.

When droplets of moisture first form in the atmosphere, they are so small that they float on updrafts of air. When lots of droplets join together, they eventually become so big that they fall to the ground. It takes about one million cloud droplets to make an average sized rain drop. 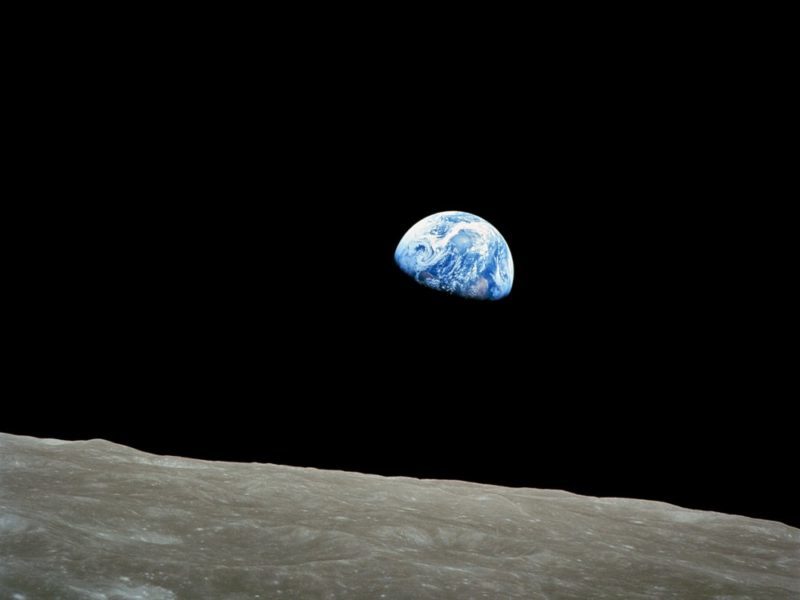 Earthrise, a photo that changed the world 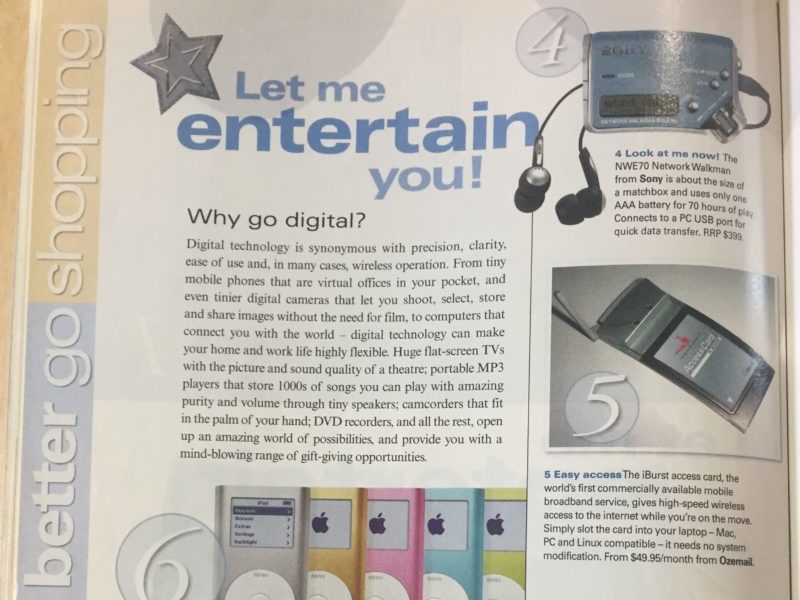 The march of technology 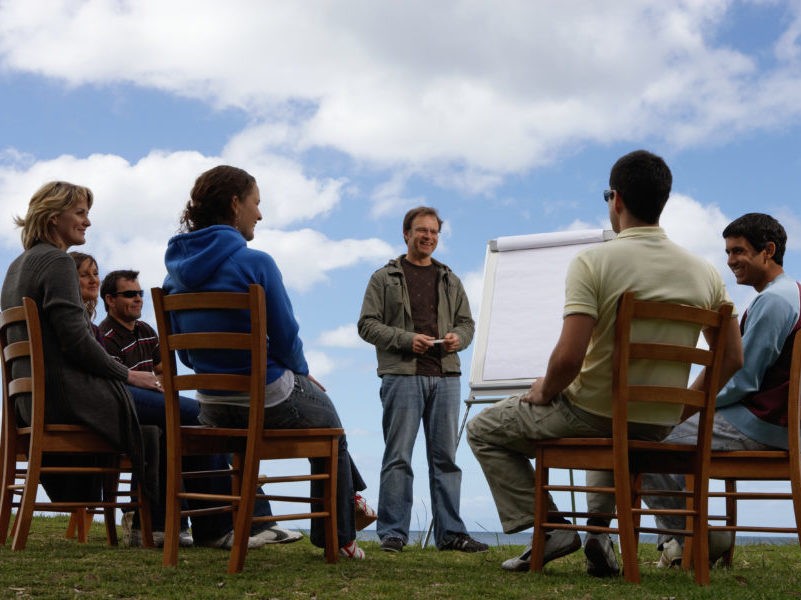 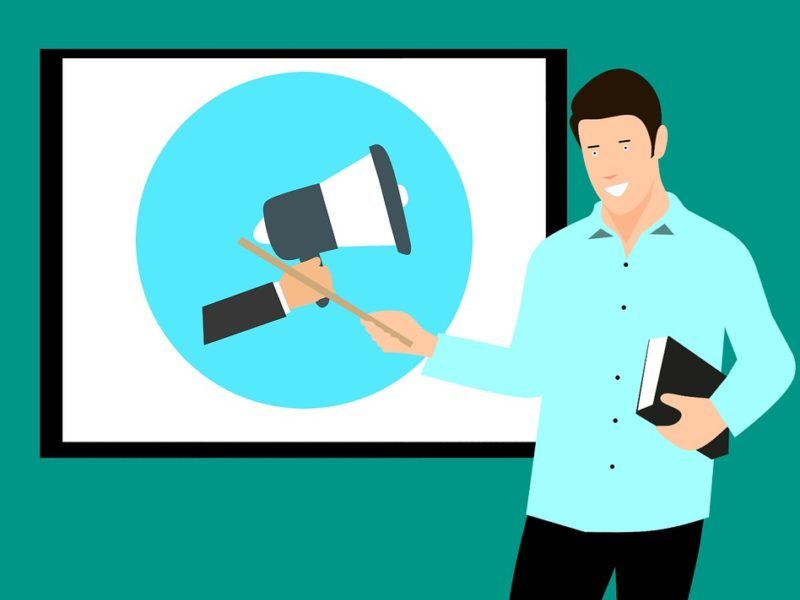